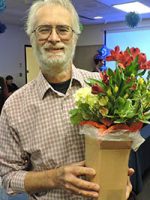 During most of his time at SPH he served as the Medical Director of the hospital’s Emergency Department, serving as the champion for systems development, recruitment and advancing practices.  Examples of recent improvements was supporting the tele-connection to Kachemak Emergency Services ambulances for in-field connection to patient vitals and health data to better prepare the emergency department for their arrival, and the adoption of tele-stroke, web-based telemedicine which allows a consulting neurologist to get their eyes on a patient within minutes of their arrival to the Emergency Room.

During his tenure he was also active in overall hospital improvements, serving at times as Chief of Staff, as member of the Medical Executive Committee, on the hospital expansion committee and numerous advocacy efforts on behalf of advancing healthcare for the community.

Smith attended medical school at the University of Indianapolis and did his residency at the University of Utah Medical Center, Salt Lake City. He practiced for five years in the emergency room at Holy Cross Hospital in Salt Lake City before moving to Alaska and joining the medical staff at South Peninsula Hospital.  He also provided ER coverage at Central Peninsula Hospital in Soldotna during some of his career in Alaska. He is Board Certified in Emergency Medicine.

Hal’s service was honored at an employee event at the hospital. He plans to spend more time fishing in retirement.