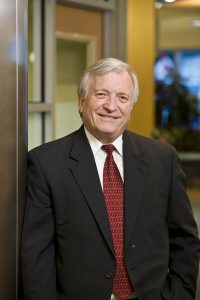 After nearly a decade at the helm of South Peninsula Hospital, CEO Robert Letson retired in December, 2017.

As CEO, Letson is credited with numerous organization achievements, including improved financial performance, the addition and expansion of outpatient clinics and services, the inclusion of primary care, and the successful recruitment and retention of 26 new physicians.

Matt Hambrick, president of the hospital’s board of directors, said, “We are extremely grateful for Bob’s leadership and dedication over the past 10 years. He led our community hospital to a top-100, five-star level, improving the quality of life for the residents we serve. His vision and commitment put our community hospital on the leading edge of healthcare.”

Letson became the hospital’s chief administrator in March 2008, bringing with him more than 21 years of proven success in not-for-profit hospital management and 13 years with for-profit hospitals. Since then, he has been instrumental in the advancement of hospital services and operations. Under his leadership, South Peninsula Hospital has three times been named a Top 100 Critical Access Hospital in the nation, chosen out of 1,300 eligible hospitals based on quality, patient perspective, affordability, market strength and other performance indicators. Additionally, the hospital’s nursing home is rated five-star by the Centers for Medicare and Medicaid Services Quality Compare Program based on quality measures, staffing and health inspections.

Letson worked closely with the hospital board and Kenai Peninsula Borough administration to improve the hospital’s financial performance and set the organization on a financially sustainable foundation. Playing a significant role in that was the 2012 merger with Homer Medical Center, the community’s largest primary care clinic – a move that put the hospital in line with current healthcare delivery and reimbursement models.

As hospital services grew, so did the need to employ talented, dedicated people, and under Letson’s leadership, the hospital became a top employer and economic driver in the community, with more than 400 employees and a payroll of over $25 million.

Letson successfully led the effort to obtain Critical Access Hospital, Emergency Level Trauma IV and Patient Centered Medical Home II designations. He also guided the organization through the maze of the Affordable Care Act (ACA), preparing the hospital for the industry changes and ensuring it remained sustainable through implementation of the ACA.
Most recently, Letson championed the expansion of Homer Medical Center to increase access to primary care and better meet the demands of the growing and aging community. The expansion, which received voter approval in 2016 and broke ground in spring of 2017, includes the addition of seven exam rooms, an expanded waiting room, procedure rooms, and general added capacity. This expansion will allow for the addition of primary care providers, which is necessary to meet current demand in the community.

Letson received the American Hospital Association’s Grassroots Champion Award in 2013 for his exceptional leadership in generating grassroots and community activity in support of a hospital’s mission. In 2012, he was named in the inaugural list of “50 Rural Hospital CEOs to Know” by Becker’s Hospital Review, acknowledging his commitment to providing high-quality, accessible care and his approach to the challenges of rural healthcare.

In addition to his leadership at the hospital, Letson is also active in the community. He has served on the Homer Chamber of Commerce board of directors for seven years, and is currently the Chamber president. He also served on the Kenai Peninsula Borough Healthcare Task Force, is currently on the Alaska State Hospital and Nursing Home Association (ASHNHA) leadership team, is chair of ASHNHA’s Small Hospital Network and Workforce Development Committee, and is Alaska’s alternate state delegate to the American Hospital Association.

“Bob’s easy-going manner and community-minded spirit will be missed,” Hambrick said. “It was an important factor in relationship building, not only internally with employees and medical staff, but out in the community and state.”

Letson is a fellow of the American College of Health Executives, is board certified in healthcare management, and has his master’s degree in healthcare administration. He has been a hospital administrator for more than 40 years. Before coming to Homer, he worked most recently for eight years as CEO of Gilmore Health System in Amory, Mississippi, and five years at Florence General Hospital in Florence, South Carolina.

Letson and his wife, Cristal, plan to move east to be closer to family and spend time with their growing number of grandchildren.

Get Your Flu Shot
Scroll to top