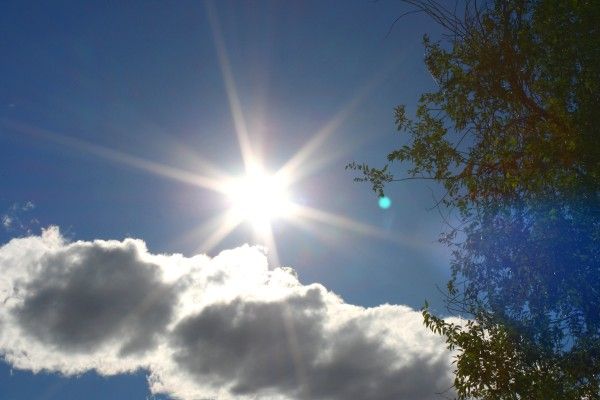 Skin is a critical organ providing protection from sunlight and ultraviolet (UV) radiation, injury and infection, and helping control body temperature. Skin cells store water and fat, as well as make vitamin D. The skin is made up of layers, with the outer most layer being the epidermis. Flat squamous cells are found here, and under them are the round basal cells with melanocytes mixed in. It is these melanocytes that give skin its color. UV rays cause the melanocytes to make more pigment, thus darkening or tanning the skin.

There are two types of UV radiation that penetrate the skin: UV-A and UV-B. UV-A rays penetrate deeper and are more responsible for allergic-type reactions, including a rash. UV-B rays affect the top layers of skin, and are more likely to result in sunburns. Both types are also emitted from indoor tanning devices.

UV exposure happens from being in the sun and the use of indoor tanning devices, such as tanning beds and lamps, but UV is also reflected off snow, water, sand, pavement or grass. Exposure to UV radiation has many effects in addition to tanning, sunburns, and the risk of skin cancer. Pre-mature aging of the skin, wrinkles, a decrease in elasticity of the skin, dark spots, and pre-cancerous skin changes are all effects of exposure to UV. The immune system can become suppressed, and there is an increased risk of eye problems such as cataracts and eye cancer.

UV radiation damages the skin’s cellular DNA, with genetic mutations that can develop into skin cancer. UV has been named as a proven human carcinogen by the U.S. Department of Health and Human Services and the World Health Organization. (skincancer.org)  According to the American Cancer Society, skin cancer is the most common form of cancer in the United States. In the US, nearly 5 million skin cancers are diagnosed each year. This makes skin cancer more common than all other cancers combined.

Non-Hispanic Caucasians have the highest rate of skin cancer, with American Indian/Alaska Native second highest among men; third highest among women (CDC, 2011). In 2011, the incidence of melanoma in Alaska was 9.0-18.4 per 100,000 people (CDC, 2014).  This is the same rate as those living in states such as Arizona, New Mexico, Texas and Louisiana.

There are three main types of skin cancer which are named for the affected cells:  basal cell carcinoma, squamous cell carcinoma, and malignant melanoma. The most common types are basal and squamous cell cancers, are mainly found on areas of the body that have been exposed to sun, and are generally correlated with the amount of sun an individual has been exposed to. If found early, these cancers are highly curable. While these types of skin cancer are less likely than melanomas to metastasize to other parts of the body, if not treated they can cause tissue and organ damage, scarring, deformity, or in some cases can be deadly.

Melanocytes are the cells that form the pigmented moles, and are also the cells that can develop into malignant melanomas. Melanoma is generally found on the chest and back in men; on the legs in women, or on the neck and face on any one. This type of skin cancer is less common, but can be more serious and much harder to treat if not detected in its early stages.

Melanocyte cells are responsible for moles, as well as melanoma cancers. Moles are very common and are almost always harmless. They usually do not change in size, shape or color, and most are smaller than a pencil eraser in size.

Any mole that appears at an older age, changes in size, shape, or color are warning signs and should be looked at by a physician. To help identify mole-like areas that may be melanomas, the ABCDE checklist is suggested.

A = Asymmetry. Both halves of the mole do not look the same.
B = Border. The edges of the area are uneven, jagged, notched, or blurry.
C = Color. Uneven color throughout. Areas may be brown, black, pink, red, white, blue.
D = Diameter. Larger than a pencil eraser, although it is possible for melanomas to be smaller.
E = Evolving. Changes occur in size, shape, or color.

Tanning bed use involves timed exposure to both UV-A and UV-B radiation. With UV radiation being determined to be a known carcinogen, use of these tanning devices increases the risk for developing skin cancers. In July 2009, a report from the International Agency for Research on Cancer concluded the use of tanning beds before the age of 30 increases the risk of melanoma skin cancer by 75%. In a case-control study by Lazovich, et al (2010) of approximately 2,300 individuals in Minnesota, they found “melanoma occurred more frequently among indoor tanners compared with persons that never engaged in this activity”. (American Association for Cancer Research, 2010)  The incidence of melanomas in Minnesota in 2011 was 22.9-34.1 per 100,000 people (CDC, 2014).

Many states and several countries have passed legislation to limit the use of tanning beds to people 18 years of age and older (CDC, 2014).  In a May 28, 2015 news release from the American Society of Clinical Oncology, scientists at Roswell Park Cancer Institute in Buffalo, N.Y. report that since the 1970’s melanoma has increased by 250 percent among children and young adults in the U.S. (NIH,2015). There is a growing number of tanning bed customers who are teenage girls and younger women, according to the National Cancer Institute. The N.Y. Times (2015) reports about half of the top universities in the country have indoor tanning available on campus or in off-campus housing.