It’s All About the Bones

Bone is living, growing tissue that has important roles to play, including structural support for the body.  The body’s 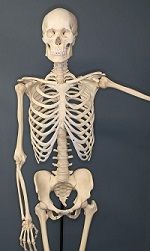 While there are two shapes of bones (flat, found in the skull and vertebrae and tubular, such as arm and leg bones), they all have basically the same structure. The cortical bone is the hard, outer part of the bone. One substance found in this part of the bone is hydroxyapatite, which is made up of minerals including calcium. Bone strength and density is primarily due to the hydroxyapatite. Another substance in the cortical bone is collagen, which is a protein responsible for providing a flexible framework to the bone.

The trabecular bone is the inner part of the bone and has a honeycomb appearance. While this area also contributes to bone strength, this part of the bone is softer and less dense. The open spaces in the trabecular bone are filled with bone marrow tissue with cells that make blood.
Periosteum is a thin membrane that covers the external bone and contains nerves that will sense bone pain. Blood vessels enter the bones through the periosteum, supplying blood to the bones.

In order to maintain peak bone mass, the bones are continuously going through a process known as “remodeling”.  This is a non-stop process of bone breakdown and re-formation of new bone to maintain bone mineral density (BMD) and to repair injured bone.
Osteoclast cells are responsible for tearing down old bone by microscopically removing small portions of bone at the surface. These large cells are released from the bone marrow to the surface of the bone. This process releases calcium and other minerals into the system, and is known as resorption.

The holes left behind are filled with new bone by osteoblasts, another type of cell from the bone marrow. It takes about 10 years to completely reform every bone in the body. Qsteoblasts line the surface of the new bone and control the movement of calcium into and out of the bone. They also respond to hormone signals to activate osteoclasts. Osteoblasts work slightly slower than osteoclasts, meaning new bone is made at a slightly slower rate than old bone is removed. Osteoblasts use available calcium from the bloodstream to help create the new bone.

Some osteoblasts become trapped in the new bone and become osteocytes, which send out long branches to connect with each other and send messages to direct remodeling activity. The osteocytes are also reservoirs for calcium. It is thought osteocytes can sense increased workload on the bones, and will initiate osteoblast activity, thus increasing bone density. Conversely, they may also sense decreased workload and will increase osteoclast activity, thus weakening the bone. This points to the argument for weight-bearing exercise being a part of building strong bones.